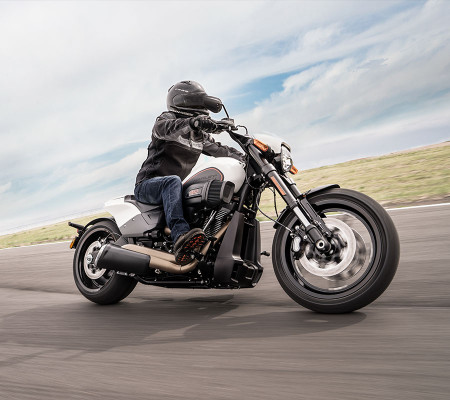 The FXDR has arrived and our demo is taxed and ready to go!

If you’ve been stunned by images of the FXDR 114 and eager to see the new machine up close, you’ll be pleased to hear that it is now ready for test rides. It's time to throw your leg over it and put the power and lean angle claims to the test!

The FXDR is the first bike in the new Softail line-up to be offered exclusively with a 114ci Milwaukee-Eight® V-twin engine. It benefits from more lean angle than any other Softail – 33 degrees to left and right. You'll feel it makes a huge difference when cornering.

Here's what our MD, Don Rutherford, had to say about the new bike: "From the moment you step on to ride the FXDR you can feel it’s different. It feels light, purposeful with an aggressive riding position. Then you ride it and you know why it feels different; it shortens straights and smooths out corners – it’s a blast!"

MCN reported that: “Harley-Davidson's new performance cruiser looks set to have the ‘go’ to match its drag-strip styling. The new, street fighter-style FXDR doesn’t just have Harley’s latest, most torquey Big Twin engine, it uses an updated, lighter version of its new Softail frame which should give it the best handling of any Harley Softail.”

Bike Exif’s summary of the FXDR as a “rowdy, fun ride" and we could'nt agree more!